Christmas at Pennington's by Rachel Brimble 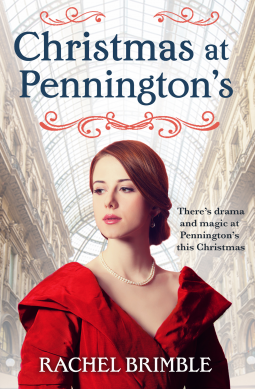 A department store in Bath brilliantly preparing for Christmas but behind the scenes there is a lot of drama. A killer stalks the streets of Bath preying on women - and women who are respectable and doing good for the community.

Cornelia desperately trying to carve a niche for herself and her two sons in a contested divorce case. Stephen head of security at Penningtons, finds himself drawn into a murder investigation which he does not want to even know about. Stepping down from Scotland Yard he just wants to keep his head down and get on with his daily life. Joseph and Elizabeth cannot get past the tragic murder of Joseph's first wife and this is affecting their marriage and when murder strikes again they know they cannot sit back, despite Police inaction.

The characterization was spot on and the mystery murder detective theme was well thought of and detailed.

Sent to me by Netgalley for an unbiased review, courtesy of Aria
Posted by Mystica at 7:59 PM

I do want something Xmassy soon

I like that it can be read anytime. Sounds good!

This makes me want to start reading some of my holiday themed mysteries! This sounds good.