Death in the Village by Betty Rowlands 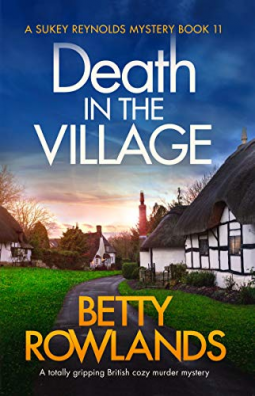 Adelaide Minchkin's body was found by the milkman dead on her bathroom floor. Apparently cardiac arrest but when her doctor insists that something is not quite right and that the coroner seemed to have overlooked or rather decided rather quickly that her death was due to natural causes, and causes a stir, the local Constabulary are called in.

When Sukey delves further into the happenings of this sleepy little village, lots of stuff surfaces. The previous owner herself, elderly in that case died suddenly and Adelaide who inherited the estate was an outsider, causing much ill will amongst the three siblings of Muriel. The owner before Muriel himself had died - sozzled, falling into a pool and drowning. The three deaths in succession are all quite self explanatory but now that a question has been asked, it is upto Sukey to investigate further.

Systematically going through the history and evidence around, and questioning all the villagers who are characters in themselves from the char lady to the local bar keeper was very well done and slowly a picture emerges of someone trying to hide something. When an old "cold" case seems to be somehow linked with the present deaths, Sukey knows she is on to something suspicious.

Told in a slightly old fashioned style, very reminiscent of this author's style the book is totally engrossing.

Sent to me by Netgalley for an unbiased review, courtesy of Bookouture.
Posted by Mystica at 8:10 PM

My mother loves this old fashioned kind of mystersy.

I can imagine this as a movie in black and white!

I haven't read Rowlands before, but I do want to give her books a try.