Murder in Midtown by Liz Freeland 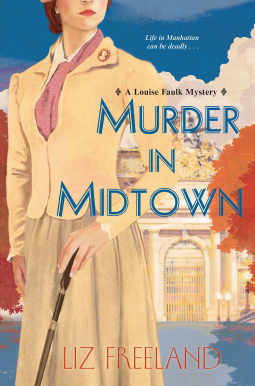 1913 America and though women were beginning to have a place in society there were still strict boundaries and conventions to be followed. Many careers were completely out of bounds and Louise's decision to join the Police Force was something that did not go down well. Fortunately her own Aunt was solidly behind her but even at the Police Station the treatment meted out to her was derogatory and unkind.

Louise was a determined girl - she was very focused on what she wanted to do and how she wanted to get about it. Having helped in solving one murder, the next one that crossed her path she was not going to give up on, despite all the pressure to do so.  When Guy Van Hooten is found charred to death in a fire which is ruled as not accidental, she is on the case immediately. The fact that Guy belonged to one of the upper rich aristocratic families in the city did not deter her and neither the fact that looking into his death brought her into conflict with the mob were minor details where finding the truth was concerned.

A little unusual for her time this story had lots to give optimism for the future and know that the American girl was going the right way!

Humour despite lots of odds kept Louise going all the way.

Sent to me by Netgalley for an unbiased review, courtesy of Kensington Books.
Posted by Mystica at 6:56 AM

I love to read about progressive women like that!

This sounds great Mystica. I have a review on a book with a similar theme coming out this week, The Policewomen’s Bureau about a female Policewoman in the NYPD in the 50’s.

Sounds like an intriguing book. I love a good mystery.