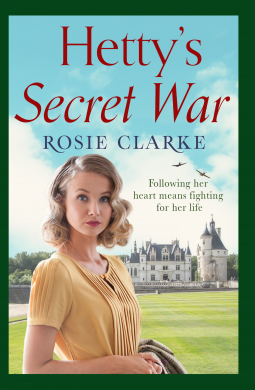 WWI and II both fascinate me. The stories thrown up are intense and emotional - always. Survival in the face of hardship, persecution, then the separation sometimes temporary most often permanent from loved ones, the fear of the unknown, the missing. Then you get immense stories of courage of ordinary men and particularly women who took up the challenge at every level. The stories are never dull.

This was another good one.

Three separate people linked by the War. Georgie the only man she loved gone on a secret mission as a spy. Will he ever return? It seems so sad that after waiting so long for happiness that it is snatched away from her. We have Beth on the threshold of being a young woman. In love and marrying in such haste. Her husband in France. Every time the bell goes she is in suspense whether it is for her with the dreaded news. When it does come she has to face it head on with a baby on the way. Then we have Hetty who went away to France impetuously. Fled with a French lover, disillusioned by love and men, now caught in a no mans land with no way to return.

Each story was intense and Hetty's one though more dramatic than the other two all were equally emotional. The losses which each woman faced in turn were really sad. Each waited for happiness, each was given it for a short time, then it was lost. The fact that they continued to live with faith and hope and finally found comfort and love was enlightening.

Beautifully told the three women were individually strong characters who grew with the story. Descriptive of both England and France at the time in 1939 it brought everything alive.

Sent by Netgalley for an unbiased review, courtesy of Aria.
Posted by Mystica at 6:36 AM

I enjoy the genre but hadn't heard of this title. Adding it to my list.