Murder in the Dining Room by Betty Rowlands 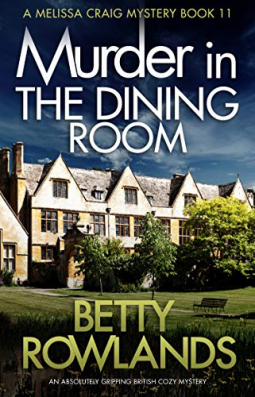 After a rocky start, relations with her mother seem to be on an even keel and Melissa is keen for renovations to the extension to be finished soon so that her mother can move in and live with her on a permanent basis. In the meantime, the accommodation at the nearby retirement home is very good and her mother seems to have settled in for this short period.

The apparent murder of a pet dog and then the sudden demise of its owner sets Sylvia off on a tangent, determined that foul play is amiss and Melissa is terrified that with her interference that if there is an actual murderer around, her mother is the one in most danger as she is stirring things up without realizing it.  Initially skeptical, Melissa begins to think that something is amiss in the Home and that its inmates are not exactly what they seem.

Like everyone else, people are hiding secrets. There are skeletons in the closet that no one wants anyone to find and there are those who are determined to keep them hidden.

An old fashioned mystery murder, with slow detective work being laboriously followed up is this story. It does not mean it is boring though. Reminiscent of Miss Marple mysteries this was a good one.

Sent to me by Netgalley for an unbiased review, courtesy of Bookouture.
Posted by Mystica at 5:15 AM

My mom loves old fashioned mysteries so I'm going to tell her about this series.