The Last Hours by Heidi Ashworth 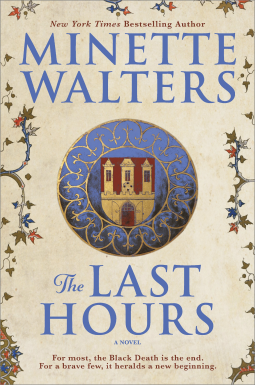 In 1348 when plague strikes England, it is a new disease and no one knows how it is spread. When one reads of the squalor and the lack of hygiene which was widespread it is miraculous that the country escaped the plague before this.

Attributed to God the plague is widespread and when it enters Dorsetshire, the Lady of the Manor decides on a drastic course of action which will save over two hundred souls who belong to the village. She brings them all into the castle, closes up the entrances and prevents anyone, including her husband who was a villain of the first order to enter the castle. Her husband brings with him back the plague and dies along with his soldiers save one.

The story of how Anne saves her household against all odds, against marauding fellow Lords who want to gain access to her house to plunder whatever gold she has, and above all a treacherous daughter who will not hold anything sacred to destroy her mother and all she stands for.

It was not an easy book to read because the raw emotion and animosity that the daughter had for her mother was unbelievable. It is quite clear at the end though but it did not make it any less easy to accept.

Sent to me by Netgalley for an unbiased review, courtesy of Mira Harlequin (US & Canada)

I have only read one Minette Walters novel, and I really enjoyed it. I keep meaning to read more by her. I really like the sound of this one.

This sounds intriguing - it's a new author for me. Thanks for the great review. I can't imagine living during the plague and trying to determine how to deal with it!

I agree with you-- the daughter was the most difficult part of this book to accept, but I really enjoyed reading about how one particular group of people chose to defend themselves against the plague.