The Murder of My Aunt by Richard Hull 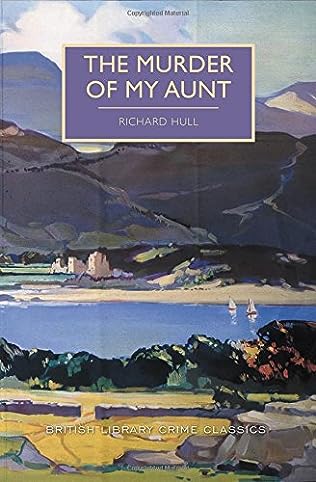 Edward is effete, spoilt, rather stupid young man. He is totally dependent on his aunt who is the opposite of him. A strong, capable woman she sees through him totally, but a promise is a promise and one she intends to keep to her long dead sister to provide a home for her son.

That he intends to murder her by one means or another is the story and when one fails, he tries another. That he journals all these attempts shows his mental capabilities and the fact is that Aunt Mildred is aware of everyone of them and even of his plans before the execution of them.

A British Crime Classic with a superb ending. I found his antics rather annoying to read about but you did need to read the whole lot to get to the ending!

Sent to me by Netgalley for an unbiased review, courtesy of Poisoned Pen Press.
Posted by Mystica at 12:50 AM

First I've heard of this one. Glad the end justified reading the annoying aspects of Edward :)

I'm glad the ending made up for the main character LOL

Sounds fascinating and its good to know she was an astute woman!

I haven't heard of this one, but it sounds great. Edward does sound annoying, but you have me thinking it would be worth it to put up with to find out what happens!