Be Still The Water by Karen Emilson 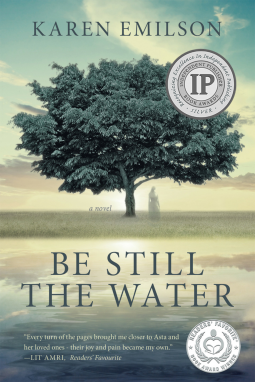 A family saga involving three generations, also a rare book about Icelandic immigrants to Canada at a time when immigration was not the hotly debated topic it is now.

Settling down into a fishing and farming life, these hardworking, industrious Icelanders knew their subject and were determined to make a fresh start and do it well. That they succeeded was due to their work ethic and very strong moral values along with strong family ties which never lessened even under immense strain.

Woven into the history of the period was also the story of youngsters who came to Canada as infants and who grew to adulthood and finally old age, making a great success of their lives both personally and professionally.

It was a quiet book if that is an adequate description. It was serene despite the bloodshed, despite the war intervening and despite intermittent loss of life. I enjoyed the characterization as well. Very descriptive of the bleak and icy conditions of where they settled, this shows an outsider of what life was like at the time in outer Canada.

Sent to me by Netgalley for an unbiased review, courtesy of Kobo Writing Life.
Posted by Mystica at 3:36 AM

I love the cover and think the book sounds good. I'm not sure I've read anything about Icelandic people.