The Forgotten Children by Anita Davison 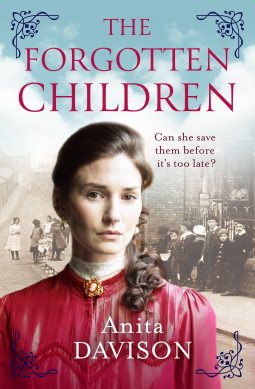 Part of a series and part historical fiction and part of an ongoing detective series, Flora has been involved with the police before in a murder investigation. Now Flora is married very happily to Bunny and has a very young baby. Very comfortably off her existence is far removed from the extreme poverty in London and the sleaziness of the slums.

An invitation to St. Philomena's Hospital for children depicts a different side of the fate of children in London to both Flora and Bunny. Children from deprived homes who are sick and who because of their very poor environment have very little hopes of recovering from some of their ailments. Meeting the Matron in charge of St. Philomena's also brings a spark of a memory to Flora though it is only later that she can pin her thoughts down to a specific one.

Following the visit Flora and Bunny are notified that young children are disappearing in London and no one seems to know where they end up. The police are not bothered by it as domestic issues like this at the time are considered family matters and cannot be prosecuted. No one seems to be willing to listen to them, that something is amiss specially since the Salvation Army seems to be involved. The Salvation Army works amongst the poor and are seen as just one of the few organisations trying to help the poor.

With the help of friends and the support of the Matron Flora and Bunny unearth a plot of far reaching ramifications. Trying to save the children taken so far puts them all in a dangerous situation from which they manage to escape with the children intact and all the villains under lock and key.

The book was an eye opener as to living conditions amongst ordinary folk in London in the early 1900s. It also highlighted the indifference of the rich to these conditions and very few took any interest in trying to help in any way possible. Those who did were not looked at very favourably either, which I found strange.

Sent to me by Netgalley for an unbiased review, courtesy of Aria, this was a very intriguing read.
Posted by Mystica at 4:17 AM

I like historical fiction that teaches history, although as a mom I sometimes find stories like these somewhat depressing, unless it's written in a hopeful manner.

Very interesting. I haven't heard too much of slums of London in early 1900's but even watching some of the TV shows like Call the Midwives in the 1950's shows they were not good.

I like the description and setting of this book and series.

Sounds like an interesting read, and a good detective story as well as a look at the unfortunate way the poor were treated. Sadly that seems to be a universal thing oftentimes. Glad this was good!

This does sound like an interesting way to look at the treatment of the poor in London during this time period.