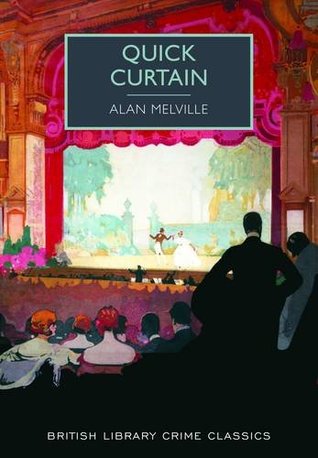 Another story told in an old fashioned style, but one that was rather interesting though a bit quirky at times!

Centred around a successful director and a particular set of actors with the famous director Douglas B. Douglas there are actors and actresses who are not all quite what they seem. With judicious and clever publicity stunts, the mediocrity of the play and its actors are not of any importance but our Mr. Douglas has enormous popularity and benefit as a result.

The actors are well known and much sought after (opening night has people queuing for three and four days and nights to get first dibs in) and even a murder cleverly executed as part of the play does not dim the popularity of this particular play.

Inspector Wilson who was present whilst the murder took place, takes immediate charge of the investigation and along with his son who is a journalist tackle the whys and wherefores to get to the bottom of this murder. A suicide by the chief suspect immediately following the murder  adds to the confusion when no reason or animosity existed between the two.

The suspicion now moves to others in the play and moves far from London to a smaller village where another murder takes place. It is now imperative to get to the bottom of the deaths and our Inspector is stretched to find the evidence he needs to pin the murderer. Assistance from his rather droll son helps and the murder is solved.

Sent to me by Netgalley for an unbiased review, courtesy of Poisoned Pen Press.

I love the look and sound of this one! Thanks for sharing...and for visiting my blog.

This sounds like a good mystery!! Thank-you for the great review.

I like a good old fashioned read now and then.

This sounds like a fun mystery, and nice that it takes place both in London and in a smaller village? I'm a sucker for those English villages!!