The Sultan and the Queen by Jerry Brotton 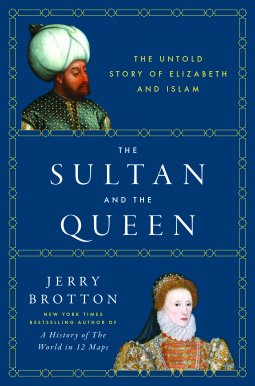 Elizabeth I was always a women to be reckoned with. She would done very well in the present times, ruthlessly deciding what was best for her country and her country alone. At the time, she was fiercely loyal to her country and decided that any decision she took was vital for the development of England alone.

Having been excommunicated from the Catholic Church, she was now in a predicament how to maintain her trade links and more than maintain, how to further develop them with the Sultan's Empire. She knew vast amounts of money could be made through trade which would in turn help England immensely.

Establishing trade missions with Morocco, Iran and the Sultan established English supremacy in the trade world for years to come. She had to do a delicate balancing act with these missions  and make sure the alliances went from strength to strength.  Everything Eastern  become fashionable and in demand and this was what established England as a trading power right into the twentieth century.

For readers of history, this was another fascinating read of a powerful Monarch who balanced being a woman and a ruler in medieval times very well. It showed it could be done.

Sent to me by Netgalley for an unbiased review, courtesy of Penguin Group Viking.
Posted by Mystica at 12:52 AM

Sounds good. Is it historical fiction or non-fiction?

Wow, this sounds fascinating to me.

Certainly a strong woman and a time when monarchs actually had power.