Before I go by Catherine Cookson 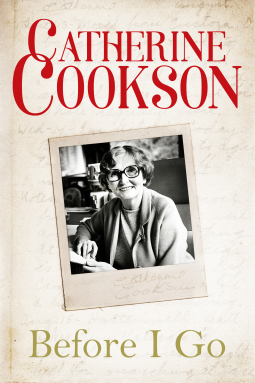 A candid story of a rags to riches story of an extremely prolific author - forthright and truthful to the end.

Catherine Cookson's life was hard from the word go. An alcoholic mother who played on the child's emotions, a friend who played her out ruthlessly not just whilst living but even after she was dead (keeping letters in a place where she knew it will be found and hoping that it will hurt and destroy her marriage) and the worst of it all undiagnosed illnesses which would have killed off a less strong willed person.

The illness alone was enough for a biography. It was continuous and Catherine Cookson talks about it so matter of factly it is unbelievable. Even depression after bouts of miscarriages did not mar her spirit, and the jealousy of peers and those around her at her literary success did not affect her generosity of mind. The enduring love and support of her husband is the beacon of light in this story and it shines throughout.

This book was discovered after her death and its publication is a wonderful story of a very brave woman who fought astounding odds to gain the literary position she did.

The book was sent to me by Netgalley for an unbiased review, courtesy of Lake Union Publishing.
Posted by Mystica at 3:58 AM

Thanks for this review - I was familiar with Cookson's life but hadn't heard about this newly discovered memoir. I'll put it on my wishlist.

A good memoir is so great to read and what a life by the sound of it. Inspiring and I love that she had a marriage that was strong.