The Wages of Sin by Nancy Allen 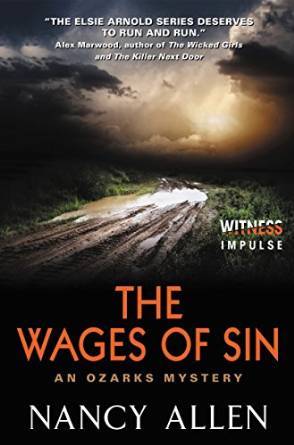 In rural Missouri a particularly gruesome murder of a young woman eight months pregnant by her partner. The only witness is her six year old daughter who is able to very clearly point out who the culprit is.

The public defender in this case seems inane, not particularly apt specially since it seems like an open and shut case. Not getting support from her co counsel as she will not support the death penalty, however deserved it is, Madeline turns reluctantly to Elsie who is equally reluctant to work with the arrogant, stuck up Madeline. Not a very good start for the case anyway.

Many unsavoury facts regarding the victim arise in the meantime and it becomes crucial to have our six year old Ivy and her statements intact. This is going to be easier said than done with several attempts made to intimidate her and even kill her. Whilst Ivy is having her own trauma in her head over the loss of her mother and now being in foster care, her temperament is such that she is not going to confide in anyone her thoughts on what she feels will happen.

The case is very straightforward but the murderer and his cohorts are not going to back down. They have hidden strengths not revealed till the very end and it was a surprising twist in the tale.

I enjoyed the story - though it was sad. I felt for Ivy who was just ignored and put aside other than by Elsie who saw her as the real victim in this case. There must be many thousands of Ivy's in the world who suffer a similar fate.

This book was sent to me by Edelweiss.
Posted by Mystica at 6:21 AM