The Story of the Lost Child by Elena Ferrante 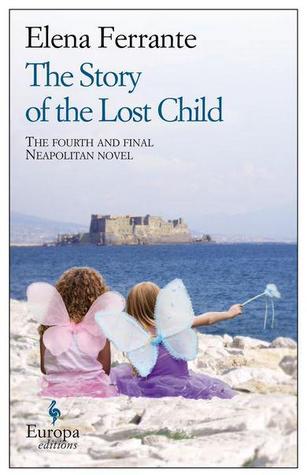 I only got to the final book in the quartet and wasn't this a good one! It took me a while to finish as its quite a chunkster and I wanted to take it slowly to assimilate the various characters. Everyone was related to everyone else in this story and it took me a while to sort out the who is who.

Elena is bookish, can be easily led and then there is Lila who is exuberant, unstoppable. Naples plays a huge role in the book as this is a city that both women cannot leave. Elena leaves it for a little while, gets married, has her daughters and then moves back. Lila never leaves. Both are successful in their careers - one writing, one business. The backdrop of organised crime, drugs, nepotism, thuggery is all very well depicted as being part of the Neapolitan culture and one has to learn to live and let live with this.

This is a story of a strange friendship between two women - ups and downs and with the vagaries of character thrown in as well. However it survives despite all odds. In many of the circumstances of the story it would seem strange that Elena will return to Lila and go back to the old existing situation despite harsh words, some true, some enigmatic, some forcing Elena to look back critically on her life and loves and to find them wanting. Then there are the personal tragedies in each woman's life - broken hearts from lovers who spurn them, from children who ignore them and finally from the loss of a toddler inexplicably. Throughout it all, the friendship survives.

This was a brilliant piece of writing and though I started with the last book, I will try to track down the other three.
Posted by Mystica at 6:31 AM

I really want to get to this series in the coming year!

I have yet to read any of her books but I've always hear they're magnificent.

I haven't heard of these books, but they sound interesting.

Oh I miss my reading time! The book sounds lovely. Thanks so much for coming by for a visit! Nice to have a comment from you!

I really must read this author. I love the sound of the story...friendships in books appeal to me. Thanks for sharing...and for visiting my blog(s).

This sounds excellent - thank-you for the review! I love stories of great friendship.

This cover is eye catching. I am glad you enjoyed it so much.

I've been meaning to read these books. Only for first two are out in my native language so far and if I start before they are all published I will probably end up reading the last two in English.

I hope to read these books soon. Thanks for your post