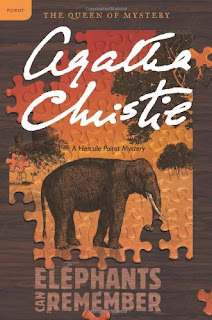 This was for me a sad book of Agatha Christie. Hercule Poirot called on to solve a murder/s(?) of a couple who died many, many years ago.  Is it possible to find clues so many years after a case is closed. Apparently nothing is impossible for the flamboyant Poirot who does it in inimitable style.

Why the murders were committed was the sad part. A rather unusual Christie.

This is Miss. Marple's last case. Gwenda feels a sense of deja vu when she is house hunting coming across a particular house. The feeling is emphasised time and time again to the point that she herself believes that she is hallucinating. Miss Marple solves a crime (again after almost 15 years) where the murderer thought he got away scot free.

Agatha Christie is so good (like Jane Austen) for me personally at times when I am tired, in a reading slump and just want to read something light which will not tax me too much. Agatha Christie really fits the bill this time around.
Posted by Mystica at 12:48 AM

An Agatha Chritie, Jane Austen or a P.G. Wodehouse is a soothing balm for a tired mind. Bedtime reading should be light too. I pick up the occasional comic-book. I haven't come round to reading the two Christies you mentioned, preferring to read her books by order of publication. Happily, I have a long way to go.

I'm just like you. Christie is one of my go-to authors when I need a bit of comforting (even though it's all murders!) Elephants Can Remember is indeed slightly unusual and is one of my favourites.

I totally agree with this - I turn to Agatha Christie when I need something comforting and not too confronting. She is perfect when there is too much going on around me!

I've been in a bit of a reading/blogging slump and I like the idea of using Christie as a comfort read to get back in the hang of things. I haven't read either of these (YET) but I do have one sitting around that I might pick up this weekend. Thanks for the inspiration!

but I think I'll pass on Elephants Can Remember. Sad is not what I look for in an AC book - or really any book. :<) I felt rather this way about One, Two, Buckle My Shoe.
http://lettersfromahillfarm.blogspot.com/2012/03/one-two-buckle-my-shoe-by-agatha.html

I love Agatha Christie although haven't read any of her books for a while, which is a crime! I can remember reading and enjoying Elephants Can Remember, but for the life of me can't really remember the plot. I really enjoyed Sleeping Murder, although I seem to remember a TV adaptation of it spooking me out!