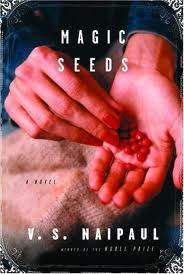 My first read of this Nobel Prize winner in literature. Originating from Trinidad he writes about the Indian called Willie Chandran (who has been featured in another book) who is a bit of a drifter - he moves from India to  London to Africa toBerlin and then back again to  India. This man is actually looking for himself as he does not seem to know who or what he is and not even sure where he belongs. He feels for political ideals and wishes he could be one of those leaders, then he falls prey to the guerilla ideals of the have vs the have nots but everything seems transitory and at every stage he seems unsatisfied with what he is doing/what he has achieved so far.

The book is not very descriptive - never mind the surroundings, not even of the buildings or the people who inhabit them. This economy seems part of the style of the writer so that everything is sparse and bare.

I would not call this a riveting read. I wanted to read it as part of my reading authors who are considered "must reads". I am not giving up on this author however and will go on to read his other books. Hopefully something exciting is going to turn up. This book was just so-so.

I don't need a lot of description but I do like a book to captivate my attention. I'll have to think about this one.

Thank you for the honest review in this book, I will look for others by this Author!

The 2012 Artist Series Feature on Anita Rivera, Designer & Paper Artist, with her Giveaway is on my site!

Naipaul has been on my 'authors to read' list for a long time. I have both A House for Mr. Biswas and Half a Life on my shelf... not sure which one to start with though.

I've only read A Bend in the River by Naipaul and to be honest I had pretty much the same reaction to it as you did to this one. I think I will avoid his books from now on, there's just not enough enjoyment in them.

I have not read this one, but have found in general big name prize winners, are often not as safe an investment in one's time as one might expect.