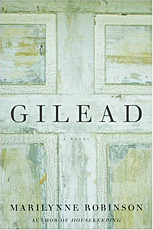 This was a good book for the very long weekend as it is not something that could be read the way I generally do, waiting for appointments or in between some work. This needed slow assimilation on the part of the reader, this reader anyway.

The book with its background period of 1956 deals with an ailing Minister who is the third generation of ministers in his family writing out his memoirs and letters to his seven year old son. He wants to imbue in his son the faith that has spanned his family for generations, to inculcate a spirit of forgiveness and also to express his feelings for the young woman he married for the second time and the joy and happiness she brought to his life.

The novel is slow and it is at the pace of an ailing seventy six year old man but at the same time it is filled with description - the month long journey when his father and he just ten years old set out to find his grandfather's grave. The pitfalls and dangers on the journey and their eventual joyful return home going on to his own faith and his joy in his sermons (all collected in the attic amounting to a few thousands) and the spirit that moves him to choose one particular aspect of the Bible when he needs to emphasise his point of view. Every aspect of spirituality and life is covered by Ames sermons whether it be God himself, the Sabbath, grace and forgiveness, and even on people sent by God with a message for you.

This was an unusual book - it was good because it made me also think a bit not just today but the time that is to come. When a book makes me think I generally know that it is a keeper (for me). A Pulitzer prize winner the author has written another book which I must try to find.
Posted by Mystica at 7:33 PM

I am pretty sure the library has it as they tend to have the winners so will take a look :)

I must completely agree with your statement Mystica: 'A keeper if it makes me think!,.
I would be completely happy if every room had bookshelves and must admit...I am getting there. We have not moved now for 10 years and I pray I will never again have to get rid of books!
Blessings to you and yours,

I struggled with this one because the pace was so slow. I did like it overall but it was a challenge to stay focused. I am in the minority though - eveyone loves it!

Gilead was a good one; hope you enjoy it.