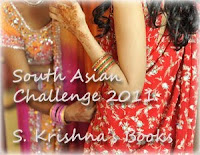 The story starts with Rehana at her husband Iqbal's grave saying that she has lost the children. It was a peculiar twist and for a moment I thought the children had died but very soon we learn that Iqbal's brother through a court order has obtained legal custody of Rehana's two children. Rehana is heart broken because she feels that she was given an opportunity of speaking up in court and she did not do so. Now it is upto her to find a way to get her children back.

The story of Rehana and Maya and Sohail( whom Rehana gets back within an year) is one part of the story. The other is the period in history in Bangladesh where the great partition took place, where Pakistan and Bangladesh were divided, over a million people died, hundreds of thousands of families became refugees on both sides of the border, and where war and brutality affected the ordinary man. Ordinary women like Rehana who was just a middle class widow trying to bring up her two teenaged children.

How the beginning of the war destroys life as it was for Rehana, the growth of urban terrorism and Sohail himself being a guerilla, how Maya turned her talent for writing towards propaganda for the cause of Bangladesh's freedom is the story of The Golden Age. It is also about Rehana hoping and praying that life could go back to what it was before the war. This can of course never be - life never ever goes back to what it was before.

This book was awarded a prize in 2008 and is a very comfortable read. My first read of a Bangladeshi author and now I must look for The Good Muslim the sequel to this. This book is part of my contribution towards the South Asian Challenge 2011 conducted by S. Krishna.

I know very little about that time period or what went on in Bangladesh so that book sounds like one that could teach me a lot. Sounds fascinating!

I haven't read any Bangladeshi writer except Taslima Nasreen. Although I have read some good books on the post partition scenario. This one sounds interesting.

This is one of my favourite books (together with the sequel) that I've read in the last 3 year. Really glad you liked it.

I really enjoyed this book. I think that it was my first about Bangladesh and the war. Here's the link to my review.

An interesting concept - from your synopsis I thought the children had passed away too.

I'm really enjoying your reviews from this challenge. I don't read much Asian literature so it's a good way for me to see what's out there.

I know nothing about this period in history, so this book sounds fascinating. Thanks for bringing it to my attention.

I liked this book, and look forward to The Good Muslim as well.

I got this one a couple of years ago and was very excited to read it but I just didn't get to it right away and it has gotten buried. Thanks for the reminder--sounds like I won't be disappointed!