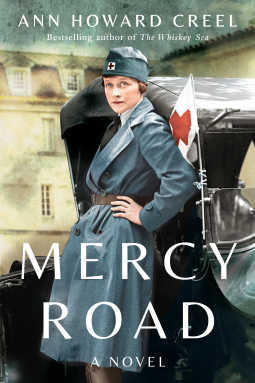 WWI and American Mercy Hospital is the background. Women still not allowed to operate in the theatre of war despite a huge demand for them so they do whatever they could to alleviate suffering.

Arlene has been brought up in a comfortable home with money and loving parents. Losing her home and her beloved father to a fire, she now finds herself bankrupt and without a roof above their heads. Leaving her brother to look after the family stud business, Arlene takes on a courageous new role of ambulance driver in France. Working in the heartland of the war, and doing the best she can in very hard circumstances she did not expect to find a stalker in the form of an American officer, who would not take no for an answer and who proved dangerous when thwarted.

The story of the officer, finding romance with someone else was just part of the story. The more important part was the role that these female American surgeons and ambulance drivers played in the War. They did an important role of bringing relief to the villagers in the perimeter of the actual action who were neglected in the bigger picture of the actual battle. On top of that they also worked with wounded soldiers, ferrying them to the camps at much personal danger to themselves.

I have not read of this service before and maybe it is a hitherto ignored part of American history. Something that has not been given much prominence maybe. Which is a pity.

The story was a good one highlighting another aspect of one of the Great Wars.

Sent to me by Netgalley for an unbiased review, courtesy of Lake Union Publishing.
Posted by Mystica at 9:45 PM

It’s rarely mentioned how common it was,
You might like to look for Ambulance Girls by Deborah Burrows

I read Stella Bain by Anita Shreve about the American women ambulance drivers. I like that they are getting more notice recently.

I have read a couple of books about American women ambulance drivers--it may be more known in the U.S. Although I don't think it's widely known even here. Which, as you said, is a pity. This sounds like a good read! I liked another of the author's books as well. It dealt with the American prohibition period.