The Village Affair by Julie Houston 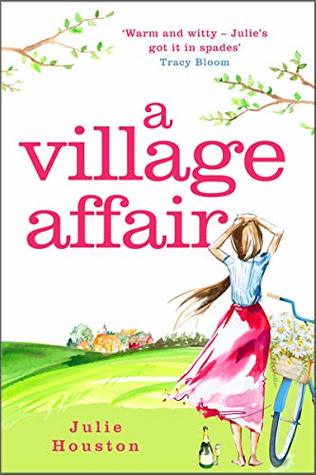 I'm having trouble with my computer and posting from my Ipad so excuse mistakes as they appear!
I leave for Melbourne middle of this month and really want to get up reviews all posted before I go.

This book was a good change for me. I have been reading so much of mystery murders and psychological thrillers, and good though they undoubtedly are, I did need a change of pace. This was reminiscent of a Joanna Trollope for me.

Three dear friends, two married and one very happy single. The ones who are married are set in their lifestyles and comfortable with it. They live in an idyllic village with very nice children as well. It all gives a very cozy feel. When one marriage falls apart in the most public of ways to the astonishment of Carrie  who had no clue that her darling husband was cheating on her with her best friend for well on two years, she is devastated. She thought she was in a rock solid marriage and to have this most publicly announced was tough on several counts. That she was starting a new job as Assistant Head of a School the very next day added to the complications.

Like in real life, turbulence comes in waves! we have an uprising in the village with the local lords of the manor (literally saying) coming up with a plan to be build 3000 houses on land in the village, upgrading the local school and generally turning this green belt into a jungle township! the villagers are divided on this issue and add to the general mayhem at this point in this story. On top of that cupid strikes again in the most unexpected way and Cassie finds herself in a quandary how to handle conflicting issues along with a romance which has disaster written all over it.

Despite several strands in the story, all good, it did not detract from the very story itself.

This was a lovely read with three very strong women as the main characters who handled everything that life threw at them with aplomb!

Sent to me by Netgalley for an unbiased review, courtesy of Aria.

I'm glad it was good - I love that cover.

Sounds like a perfect read among all the mysteries!

Sounds really good. I like the cover a lot.

Enjoy your trip Mystica and loving the sound of this one.

Sounds attractive to me, I am reading one - English - and with similar type characters and just waiting for what goes wrong!!

This sounds like a lot of fun, and I love stories set in the Englsih countryside or villages. I've been reading a lot of psychological thrillers too lately, and sometimes it's nice to have a change of pace. :)