A Light of Her Own by Carrie Callaghan 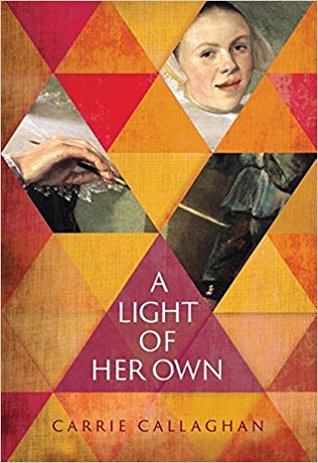 In 1633 any woman with ambition was fighting a losing battle. Never mind ambition women did not seem to hold any position other than being daughters or wives and if neither worked it was a terrible life for any of them.

For Judith abandoned by her father and mother through circumstances of debt, her brother who was her only family now getting involved in shady activities, Judith with her ambition of being an artist and becoming a member of the Guild had ambitions far beyond the usual woman of the time. With hardly any money to set herself up, she was nevertheless determined to do so.

The story of Judith's endeavours despite immense hardship, obstacles and sheer pig headedness of men around her was a tough read. It is factually true according to the author in several instances and an artist of this name did live and have her own workshop in Holland at the time. The story was intense and Judith was blessed with common sense and a sense of diplomacy to know when it was enough.

Judith upto now lived with a master guildsman and his daughter both artists in their own right but Maria had problems of her own. She would have been treated accordingly today but no one knew of her mental suffering and torment she underwent. Judith had to balance her life between being a friend to Maria and her ambition about her art on the other. It did not always balance evenly.

Sent to me by Netgalley for an independent review, courtesy of Amberjack Publishing.
Posted by Mystica at 7:11 AM

Sounds very different from what I normally read, but I might give it a try.