Die for You by Lisa Unger 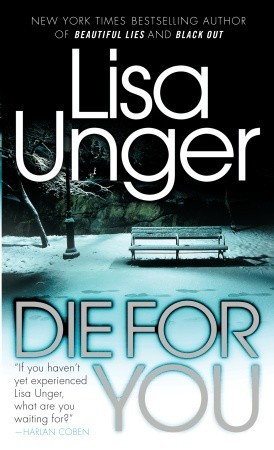 An author who has been on my TBR for a long time. I knew I'd find her here in Melbourne!

Looking at Marcus and Isabel you'd think they had it all. Love, riches, happiness, good careers and a bright future. No one knew that it was a carefully built facade at least by one of them and that the bubble would burst and how.

Marcus kisses his wife and leaves for work. It is the last time she would see him as she knew him and her nightmare begins. Missing from work, he does not return home, his movements cannot be accounted for and then the assaults begin. First the office is trashed, three innocent staff killed and Isabel is badly injured. Then the apartment is trashed and it looks very personal the way the damage is inflicted. All her accounts are wiped out and Isabel finds that the man she loved and married is definitely not the person the Police are seeking. Going back to his Czech roots involving mafia, crime, corruption and betrayal of every kind Marcus is the very scum of the earth betraying at every turn not just women who fell in love with him but also his own family.

Told by alternate characters and then going back to Isabel as a narrator the story  holds your interest and unwinds slowly showing how cleverly and seemingly so very easily a person can impersonate or rather take over a character of another person and then live out a lie with clever, meticulous planning.

The damage left behind by the calculated actions of Marcus is immense. One feels for his victims
especially Isabel as she is the only survivor of his demonic plans.  You only hope she will recover and learn to live again.

I have already dug out another book from this author for my next read. This one too came from Glen Waverley library in Melbourne.

I've read two of her books and they were both terrific. I have another one on my nightstand that I hope to get to soon.

Marcus sounds awful. I remember reading a book like that where the husband was not what he originally seemed. Not so improbable in todays world.

I really liked Unger's In the Blood, but although I liked the premise of this novel, I couldn't really care about the characters.

I have not tried Unger, maybe one day