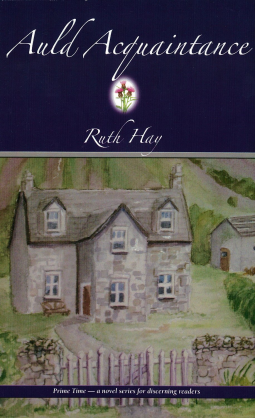 I did not realize this was part of a series till I got the book but even then as a stand alone it did fine.


Anna is in her sixties, independent with a full life (as it seems on the surface). Her marriage to Richard seemed to have destroyed her self confidence as a woman and also as a person and she fears that she should be better or prettier or whatever. Richard was very successful in battering her confidence and even years later despite the solid support of a small group of friends she is still shaky on this.


Out of the blue Anna gets a letter from a firm of solicitors in Scotland saying that a Helen Dunlop has gifted her a house in Scotland. At the same time her brother gets a letter indicating that he is the beneficiary of a legacy of cash. Dumbfounded as they cannot recollect anyone of that name in the family, Anna decides to go to Scotland to unravel the past. Her parents were rather self contained, never spoke of the family they left behind when they emigrated to Canada from Scotland so Anna with the help of the solicitor has to start from scratch.


In the present era of course with everyone cross referenced and registered somewhere for something this is not an insurmountable task. Anna discovers pleasant and not so pleasant events in her benefactor's past. Her search in Scotland also gives her comfort and grounding and she is extremely content at the step she has taken. Despite the lack of modern amenities, Anna decides to live in the farm house and see what happens and how she feels about living in Scotland even temporarily.


A very nice, warm story. Glad I got this through Netgalley courtesy of

I'd love to read this one, and am going to find out more about this new-to-me series.

Thanks for visiting my blog.

I like the spund of this book - the setting, the plot, plus the cover. I'm glad to hear it was a stand alone. I'll give it a try.

Sometimes, I wish the publishers would indicate somewhere on the book that it's part of a series. Glad you liked this one.

I think most well written series can be read as stand alones. This sounds like a winner.