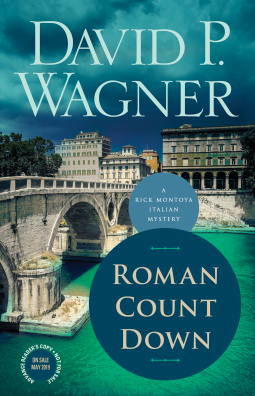 The story is a simple one. One of the upper class Counts has been found supposedly murdered just outside his residence. The police do not find any enemies or suspects as such. They are under pressure from the Countess as well to find out how and why her husband is murdered. That she was a strange bird is another part of the story.  Enter Rick who has decided to come to Rome and live there, uprooting himself from his American lifestyle to adapt to his Italian roots. His uncle is the Detective on the case and he ropes Rick in to help.

I was nonplussed how a civilian could be officially roped into an investigation but that is beside the point. The story reads more like a travelogue on Rome with special emphasis on food. Food in restaurants, food in cafes, food in hole in the wall grocers (delicious, fabulous) and traveling in and out through Rome brought the city to life in this book.

I like travel in every form so this was a lovely choice for me. I enjoyed the forays that Rick made into the by ways of Rome and how he extricated himself from them as well. You got a view of Rome from the expat as well as from the local.

Very nice reading (the murder was solved at the end) so two birds with one stone!

Sent to me by Netgalley for an unbiased review, courtesy of Poisoned Pen Press.
Posted by Mystica at 12:21 AM

It's always interesting to see how an author will insert an amateur "detective" into the solving of a crime. Sometimes it is more plausible than other times. I am glad you enjoyed this one!