From One Hell to Another by Liz Cowley & Donough O'Brien 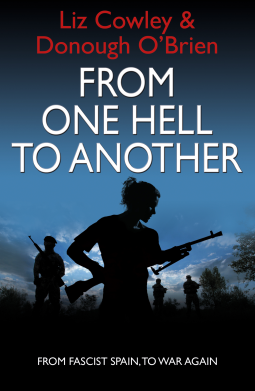 Carmen and her two sisters were from a close knit, conservative Spanish family. With the outbreak of war, their father thought it was time to send them along with their mother Maria to his cousin who lived in France. They got out in the nick of time.

Settling into a village life in France was hard. Language was a problem and though schooling sorted that issue out very fast, Maria lagged behind. She was never comfortable with the French language, found the accent difficult to comprehend and remained isolated throughout. It did not help matters because she still brought with her traditional values which in the French context were out of date.
When the Germans invaded Poland, and then France Carmen decided enough was enough. She wanted to do something constructive with her life and joined the Resistance. The family was again in the midst of war and though not as bad as other villages, life was tough.

Pedro was struggling to maintain the farm he got from a friend of Carmens (when the boy was conscripted) and making huge amount of supplies to the German army made making a living precarious. When Ottillia the second girl began a liaison with a German soldier matters became worse. Ottilia was the hard headed girl who did not listen to advice and despite knowing what became of those who befriended Germans she continued the relationship.

The day to day life of the average person in the village juxtaposed with the life and deprivations of those who joined the Resistance and who faced major setbacks and hardship were very descriptive. The thread of romance going through the book in various forms shows that love will find a way in the most difficult of circumstances. It added another layer to the story.

Moving from one war to another was difficult. They came as refugees hoping to find peace and ended up in another bigger war. That they all escaped with their lives despite being foreigners was no easy task.

Very good historical detail of one of the lesser known contributions of the Spanish to the French resistance and war effort which is forgotton most of the time was detailed here.

Sent to me by Netgalley for an unbiased review, courtesy of Troubadour Publishing Ltd.
Posted by Mystica at 10:48 PM

This sounds intense. How awful to leave one war torn place to have the new location become even worse.