Danger on the Downs. by Bianca Blythe 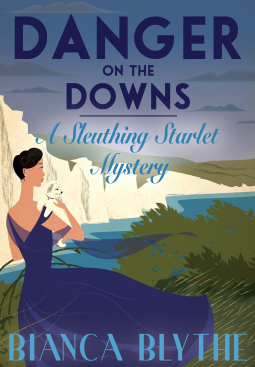 I like cozies. I like when the setting is in England in nice old fashioned houses but this particular read though it ticked all the boxes was a little too stilted, a little too constrained for me.

The gentleman of the house - suave, polished and Bulgarian was found stabbed to death in his study. There was a full party of guests in the house. Of course all are suspect. The one who has to take the fall is initially the butler who is Bulgarian himself. The Bulgarian part was given a lot of emphasis in the story as if by being Bulgarian you were automatically judged as being anarchist and looked at with suspicion by all. The butler was harmless. The guilt lay elsewhere. A second murder takes place. This time it is the innocuous Accountant. The pace hots up and the detectives know that they have a killer in their midst.

Cora is one of the invited guests but her aunt is a servant in the house. So her position is rather mixed. Neither upstairs or downstairs though the hostess appeals to her to find out who is going to kill her husband (this was just a day before he was actually killed).  The onus of guilt spreads amongst almost all the house guests and then by a series of deductions falls on the murderer.

Cora is a former Hollywood child star. The other guests are a mixed bunch and some of them have much to gain from Mr. Ivanov's death but many have no link to him at all. When the Accountant is killed, there is no one who is going to gain by his death so who and why was he murdered.

Sent to me by Netgalley for an unbiased review, courtesy of Victory Editing Netgalley Co-op

I love the cover!

I like cozies too but for some reason I don't read them very often.

I like the cover and the sound of this one as well.

This looks like a fun one, and I love the cover.