The Abbot's Agreement by Mel Starr 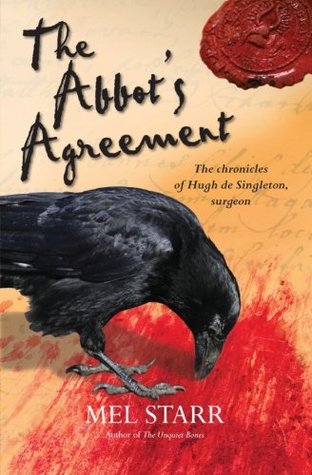 Hugh de Singleton is on his way to Oxford along with his faithful retainer Arthur when he comes across the corpse of a young monk in a field.

Hugh is a bailiff himself and he reports the matter to the Abbey where the young monk was a resident. The murder was surprising and planned and it uncovers a story that is very human. That monks are also human, subject to all the feelings of love, frustration, anger, remorse and revenge that everyone else is subject to. Also subject to avarice, the love of power and prestige which is sadly most prevalent amongst many religious today.

Set in ancient times, it is most descriptive of the era and the manner in which abbeys or monasteries were run, the spartan way of life which would be unacceptable today, the fact that it was younger sons who had no assets who sought a way of life which was not always to their liking but they had no choice, and hence they were held to ransom by unscrupulous heads of the abbeys who knew the boys had no choices left to them.

Uncovering not only a felon, it also became apparent that in this particular abbey was a group of heretic monks professing a faith totally forbidden.

Though slow, I enjoyed the read very much. May not be a book with its religious theme which will appeal to all, but the style of writing, the setting, the characterizations and the descriptions were all spot on.
Posted by Mystica at 6:39 AM

I'm not sure this is a genre for me, but I'm glad you enjoyed it.

I don't think I'd like this since it's set in ancient times.

Oh wow that's quite the cover on The abbot's Agrement. I've always found abbeys and monasteries really interesting, so seeing the details here, and also the sound of the forbidden monks, has me thinking this sounds quite good!

Mystica, the plot and the setting kind of pulls me in though I can't say I'm entirely sure yet.

I have a friend who loves this series. I must admit that I picked up the first book and started reading it but it didn't really grab me. I'm glad it worked for you.