A Family Affair by Mary Campisi 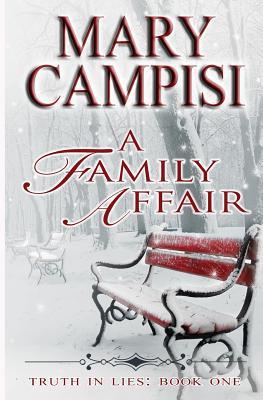 I think a story like this is only possible in a vast country like America. Here where everyone would know everyone and find a long lost connection as well, this would be implausible if not impossible.

Christine Blacksworth world is turned upside down on the death of her father. She was dearly loved and very close to him, not so close to her mother who is a very manipulative and calculating woman.
Now Christine wants to find out who the woman is and why more importantly her father bequeathed a sizeable sum on his death.

Situated in a tiny town of Magdalena, Christine discovers a mistress whom she is ready to hate with all her might but meeting up with her and her daughter Lily who has Downs Syndrome and the enigmatic Nate puts Christine questioning who was the sinned and who was the sinner here. Her father for not being able to make up his mind between his mistress and his wife, and enjoying the best of both worlds - hypocritical to himself and to his ideals, his wife who pretended she did not know of the mistresses's existence or the mistress who had her partner for just four days every month and who yearned and counted the days till he returned and this went on for over 15 years!

A complicated story with a nice ending, romance, family and survival.

This was a free download. After a very long time I found something which I enjoyed from the free titles.
Posted by Mystica at 12:51 AM

15 years of only that, but I guess if the mistress truly cared

I just looked this book up and I've had it on my Kindle since Feb. 2016. I think it's time I read it. Great review!

Happy New Year!
I've had this book on my TBR since 2012. I am glad you liked it.
Happy Reading.

Great, I do believe I have this on my Kindle for a very long time, I guess I need to read it!

I can't imagine being in either woman's shoes. I really feel for their children.

Yikes! So much compromise. Was anyone truly happy?

I have this book on my Kindle but have yet to read it!