Castle on the Rise by Kristy Cambron 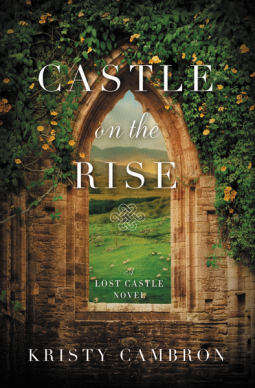 I like stories told in two separate time frames. They were also of separate genres though a love story was also part of the main stories.

Laine is following her friend to France to participate in her wedding there. Unexpected and totally unforeseen circumstances force the friends to forsake a honeymoon and return to the groom's roots in Ireland. Bequeathed a castle in Ireland with a history no one really knows much about, Cormac turns to Laine to help him find out what are the secrets in the castle, and how it can bring about peace in the family.

Told alongside this and linked to this castle is the story of the Easter Rising of 1916. Bloody, violent and merciless. It pitted Irishman against the detested English and the Protestant faith and it was long and tore the country apart. In sheer numbers the Englishmen fought to maintain supremacy and in the best forms of a rebellious army the Irish proved to be equally adept at outmaneuvering their masters.

There was strong characterization of women who played major league roles in 1916 in Ireland. Not easy on the women at all. There were love stories and tales of treachery and death but it did not detract from the sheer story telling of both time lines.

The present and the past stories both wove stories of love and faith, survival and family so those were common to both stories.

This was a lovely read which has to be savoured rather than rushed through.

Sent to me by Netgalley for an unbiased review, courtesy of Thomas Nelson Fiction.
Posted by Mystica at 5:44 AM

Oh wow, I definitely need to find this one. I love Ireland and Irish history!

I'm part Irish so I love all things Ireland. This sounds good!

Sounds great although I hate the bloodshed of the 1916 uprising part of it.

I like dual time line stories too. It sounds like the author does a good job balancing the historical story with the more contemporary one. I am glad you enjoyed this one, Mystica.