The Hatmaker's Secret by Jill Treseder 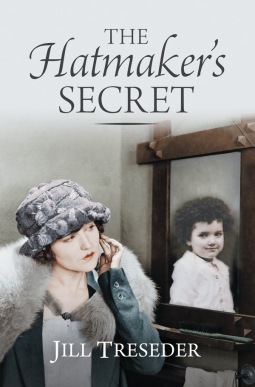 This family story started with just the present generations around. Grandparents, parents, the grown up children and their toddlers. It ended up going back several generations across countries and oceans to solve a puzzle which seemed insurmountable.

Kate and David are expecting their second child. The marriage is already tenuous and Kate hopes that with the birth of this baby things will settle down and they can make a go of their marriage. She did not account for her daughter Flora being born biracial to parents who were white. Davids skepticism as to Flora's origins and the general questions being asked around did not help either. It also did not help when Kate appealed to her mother Vanessa for help, her mother more or less ignored her cry for help in any way. Vanessa was nervous around her mother Thea, now in a stage of dementia and did not want to rock the boat in anyway. That she preferred to be deaf and dumb and not be supportive of Kate was a terrible flaw in her personality.

Thea's past was a secret. Kate knew that Thea was the key to unlocking Flora's antecedents. When Thea met her great grand daughter for the first time she threw the baby away almost causing a major accident. She turned vituperative and vicious but still Vanessa and Ted (Thea's husband) were not willing to find out anything further. It is with Thea's death that Kate persuades Vanessa whilst clearing the debris of Thea's house to seek clues as to what actually was their family history.

The story mainly of Thea's past, difficult and complicated and her present life far removed from what it was unravels the difficulties of being different in a country only used to one kind of people. Not that things have changed very much even today where racism thrives in every country in one form or another.

This was an intriguing story, with especially good characterization of women in very difficult situations in life.

Sent to me by Netgalley for an unbiased review, courtesy of
Posted by Mystica at 10:44 PM