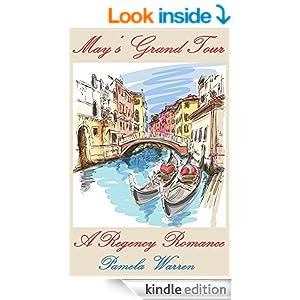 This was a free download from the  My Love for Jane Austen FB page.

I need a little light hearted romance, relaxation and fun amidst he more somber reads and this fitted the bill.

May Weston, an artist from Boston has come to visit her cousin Bingley and from there go on a tour of Europe notably Venice and Rome. Whilst in London she meets with several poets nota
Bly the notorious Lord Byron whose rather dubious reputation as a gambler and a seducer has tarnished his allure. Banned from several places, dunned by his creditors, yet May finds herself very much attracted to Byron to the dismay of her chaperones both Bingley and Darcy. They hope that whilst enjoying her stay in London, her innate good sense will prevail to not fall for the wiles of Byron.

The story continues to Venice (where Byron has holed up to escape his creditors) and while she still sees Byron, May does realize that a future with him is not to be. He is  unreliable and not trustworthy. She still feels for him unfortunately though her eyes are open to his true character. Throughout Darcy remains a strong, silent support for May and this is when the romance between May and Darcy begins.

With a wealth of detail of London and Venice at the time the story moved to Boston and then back to
Pemberley. The rich historical detail added a great interest to the story. The lives and tragedies of Shelley, Keats and Byron also added depth to the book and another dimension to the love story and life of May and Darcy.
Posted by Mystica at 12:30 AM

I haven't read it yet, but I downloaded it, too, and am happy to see you enjoyed it.