Far Horizons - Book One of The Emigrants Triology - Kate Hewitt 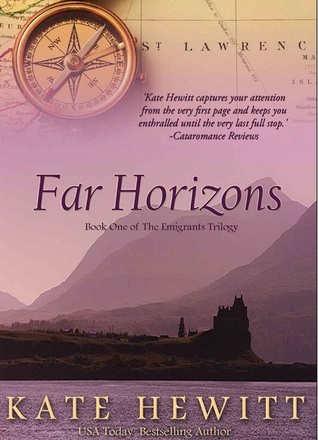 The story is based on a true premise of the author's ancestors. I was drawn to the book because of this because I invariably find such stories to be of much human interest. This did not disappoint.

Starting from the very harsh climate and living of Scotland where all farmers are under the crushing heel of a laird - someone who is only interested in money in this case and not about the needs of the people who work for him to the freer life to be found in Canada where the next stage of the story is set.

People who go from the familiar to the unknown and a harsh unknown are to be admired. It is not for the faint hearted and our story is like this. Allan proposes to Harriet the love of his life just hours before he is due to sail. However due to pressure from his father, he rescinds the proposal as he thinks it would be unfair to bind Harriet to a future which is uncertain. To make matters more complicated Allan returns all Harriet's letters leaving Harriet doubtful of his actual intentions.

Move to Nova Scotia and Allan and his family trying to make a new life for themselves. Back in Scotland Harriet faces more hardship with the illness of her father, the loss of their home via manipulation of the owner and the foolishness of her 13 year old brother and a new love interest. The effect of a long distance relationship which totally depends on only letters coming via ship once or twice a year and sometimes not at all is felt here.

Set in 1819  a historical romance with very good descriptions of both Scotland and Canada at the time one is happy however with the ending! I would have hated it to have ended any other way.

Good review and title going on my 'list to read!'
All the best,

I like stories based on true stories too. I'm glad you enjoyed this.