THE MASQUERADERS by GEORGETTE HEYER 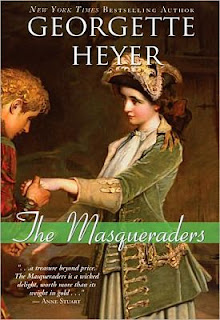 I picked up this one as I wanted a quieter book after The Casual Vacancy. This was not a slow paced read but the setting is so serene that you tend to totally relax with a Georgette Heyer novel.

We have Robin and Prudence as our "masqueraders". The boy living out the part of a girl and the girl as a boy. They act out their parts beautifully in society and no one is the wiser other than for one discerning gentleman who feels that everything is not what it seems - as he feels a distinct attraction for the young "man"!

It is a complicated story of a family with a past, as Prudence puts it - they are adventurers and not suitable to get married into "good respectable families" but like everything else things are sorted out beautifully, after several adventures, a duel or two, highwaymen and a murder and romance of the best kind.

I liked each character for what they were and they were all different. Prudence was very different to the average young lady of the time - she was daring and willing to take a risk at every turn, Robin was willing to follow whatever rules his father said at the risk of everything he held dear, the father was a dashing buccaneer almost and then we have Anthony who appears to be staid and very quiet and is anything but.

Lovely book for the weekend.

I still need to try one of her books!

Leave it to Heyer to build a strong and different female character. This one sounds delightful.

Thanks for the review. I am always looking for great books and especially love ones that are set back in time!

I thought this was really fun but almost exhausting to read with so much action. Nice to be reminded of such a fun read!

I enjoyed this title a few years back. Glad you liked it.

I think I have this one on my shelf but haven't read Heyer yet- soon!