FOR THE LOVE OF VENICE by DONNA JO NAPOLI 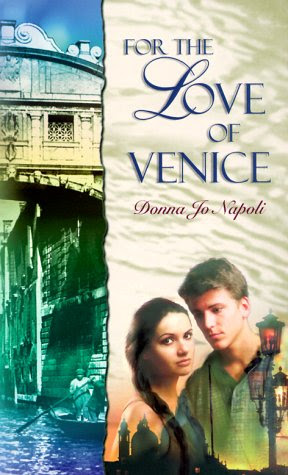 I did not realize that this was a story more geared to youngsters till I read it. Set in Venice it is about a family of Americans - father engineer, wife and two sons who set out to Venice. Father is involved in the famous scheme of putting up concrete walls to prevent the 'bora' of water coming into Venice and flooding the city which it does periodically with much devastation. Percy and Christopher totally American find themselves as aliens in this Venetian environment but very gamely take it head on, improve their Italian language skills, take in the culinary delights other than pizza and soldier on.

There is teenage romance and more importantly a bit of political action. Venetians according to this part of the story are tired of everything being geared towards tourists. Apparently even buildings cannot be renovated or even propped up so that they could be safe, as the municipal authorities want to keep it authentic ancient and Venetian. The population of Venice is dwindling and from 700,000 has fallen to 200,000 and according to the story the population is an elderly one with youngsters fleeing elsewhere.

The group of youngsters involved in the campaign to keep EXPO out of Venice are concerned for their city and the Venetians and want to keep it a living city, not a city which is like a museum for the dead and history only.

The book brought out facets which I think are little known to anyone. My copy is an old one but I presume the facts are similar. Properties are bought by rich foreigners who use it once a year as a holiday home. For the rest of the year the house is boarded up. Young Venetian families cannot find a place to live, there is no new accommodation and marriage has to be put off. I have heard of similar stories in rural Provence and the South of France. On the other hand we would have ruins of palazzos and buildings if the foreigners did not buy them, because the local populace does not have the means of maintaining these buildings.

Coming from a country which is also dependent on tourism for its economy, I did not think of resentment on the part of the locals against foreigners. I sincerely hope it is not there in Sri Lanka because that would be foolish. We earn from tourism a great deal and the benefits are numerous. In this book however, there is an underlying sense of resentment that foreigners though bringing in the money are not really desirable and why they have to cater to them at all is questioned.

I have no answers for Venetians but despite this being a teenage romance with a bit of politics thrown in, I enjoyed the detailed description of Venetian life.

Interesting discussion about the tourism trade. I visited and fell in love with Venice in 2008 and would love to go back :) That being said I can kind of get the resentment, as long as, with age, understanding of economics led to acceptance that people want to come and invest!