THE RELUCTANT WIDOW by GEORGETTE HEYER 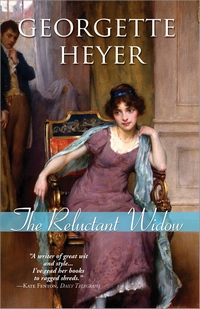 For me Christmas is usually synonymous with a Georgette Heyer read and I was lucky I had this on my pile to read in a day!

A bit unusual in that we have a feisty heroine bamboozled into marrying someone she doesn't even know and whom she met accidentally, by getting into the wrong coach (she thought she was going to be a governess for Mrs Macclesfield but ended up with Lord Carlyon!) and we go on from there. Eustace Cheviot dies very conveniently the next minute and we have Elinor a widow in a few hours and in the midst of French spies, emigres, the British administration and a missing document which will cause havoc unless found and found quickly.

Unlike other Heyer heroine's, this one is a working girl keen on her independence with marriage furthest away from her mind. Not a simpering miss or a rich heiress, the daughter of someone very respectable who committed suicide in the face of gambling ruin she certainly is different. We have our hero -a Lord of course - but one who needs to sort out the mess his cousin has led the family into and trying to avoid dragging the family name into a major scandal.

Falling in love and ending of course happily ever after  is what Ms. Heyer aims for and such it is.

I have to apologise to Jo from Jov of Book of Pyramid from the UK who sent me the book Purge won from her blog. I mixed it up with the book Without Mercy which I won from Judith of Leeswammes blog. Apologies to both parties.

Not a problem Mystica. Have a great year ahead. Happy new year.

Sounds like a great read. I really need to try this author.

A spunky heroine is always better than a simpering miss! Sounds like you had an enjoyable read in your hands Mystica. It's always nice to relax with a good book and a cuppa, is it not?

I've only read one Heyer book so far, which I enjoyed. I think I'll read this one next as I like the sound of the unconventional heroine who doesn't want to get married.

I haven't read much Heyer, but the one or two I read are fantastic. Glad this one is also. Love the cover too :)

This is one of my favourite Heyers of all time. It all comes together so well, with the romance, the mystery, and the sparkling wittiness of it all. Loved it!