A DANGEROUS FORTUNE by KEN FOLLETT 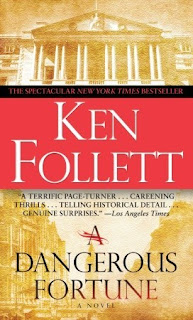 Starting in 1866 the story sets out in detail the workings of a banking family - the Pillasters and the machinations of a horrible matriarch who sets out to make her husband first the Senior Partner in the bank and then proceeds to make her son the same. How she sets about doing it is immaterial to her and who she sets aside in the process is also immaterial to her.

The story is also about Hugh - the blacksheep nephew of the family. Blacksheep through no fault of his own. His father did an unforgivable thing in the bank - pulled out his money, ended his career with bankruptcy and then committed suicide. Talk of the sins of the fathers falling on their children. Hugh ostracized from birth by the Pillaster family, and despite making enormous profits for the bank through sheer hard work could never be acknowledged for what he was actually worth, purely due to the hatred his aunt had for him.

The lust for power and money is the over riding feature for this story for each and every character. Even for our hero Hugh, his ultimate aim is to be made Senior Partner and though he is certainly not going through the murderous path of his Aunt and cousin he is quite determined to achieve his ambition even though frustrated at every turn. A lesser strong willed character would have given up at the first obstacle but our Hugh does not. It turns out to be a happy ending for Hugh and a twisted ending for the rest of the Pillaster family!


Follett does an amazing job with this story. After having read two very different kind of stories and settings before from this author, I now went to another era, another setting and liked the book so very much.  The saga of a family, almost a memoir of a banking family was an interesting one. The details of the craft of banking in those times, so different to now added to the interest in the story.

This was the first ebook I ever read and it got me hooked on Ken Follett. I'm so glad you enjoyed it!

Hi Mystica, just wanted to pop in and wish you a very happy, healthy and peaceful new year. {{Hugs!}}

I've never read any of Follett books but I understand he's an outstanding author. I really need to try one of his books.

I have only ever read one or two of Follett's earlier books, but have found the sheer length of some of his more recent novels a little intimidating, although I have heard nothing but praise for them from everyone who has read them.

I am glad that you so obviously enjoyed this book and hope that you get the opportunity to read some more of his work.

Wishing yourself and your family all Best Wishes for the New Year.