EVERY SECRET THING by SUSANNA KEARSLEY 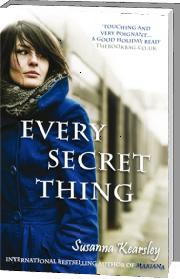 This was the second book sent by the author herself. So very different from The Winter Sea this is more of a modern crime/thriller/mystery genre and the difference was the one thing that made me enjoy it so very much. I found it amazing that Kearsley could switch from the historical fiction of the 1700s so easily to the more modern WWI days and of the 20th century.

We have Kate a modern day journalist working in Canada who is taken completely unaware by a series of apparently un-connected events and meetings which form the crux of the story and set our journalist on a path she never thought she would travel.

Kate does not take much notice of the first event as it unfurls when Andrew Deacon an elderly gentleman mentions that his story involves one of a murder which was not solved. Or rather justice not meted out. She puts it out of her mind until a few minutes later when she is the witness to a hit and run driver who mows Deacon down. Even then Kate does not know that it is murder. She just thinks it is a random accident but further events which cannot be described as coincidence any longer puts Kate and anyone whom she comes in contact with at risk.  Kate begins to realize that the plot is much more convoluted than what it seems and goes back decades and is something that the British government is not willing to be made public and even years later someone in power,  will kill and kill again to see that the truth, the embarassing truth will not come out.

Kate must now use all her journalistic skills to analyse and seek the truth. She must use her personal judgement to know whom she can trust and who will betray her. Different to the early Kearsley reads but enjoyable all the same. Liked it very, very much.

On another note, Sri Lanka is having widespread floods. 80,000 people displaced and 27 killed upto now. The floods are now hopefully abating - and help is being given to all those in need. This is a sad prelude to Christmas - so many people destitute now.

In the capital city Colombo itself, there is no flooding and the festivities seem to be in full spate. I do hope that people do not forget the less fortunate citizens.

So sorry to hear about the floods. I hope the Christmas spirit prevails and those affected by the floods receive the aid they so desperately need.

Dear Mystica,
I certainly will put this title on 'the' list! I am halfway done with The Winter Sea and love it!
Broadcast news never even mention the floodings! I pray help is on its way and rains abates. Such a sad ending to the year!
Blessings,

I did not know about this Kearsley book

I am very sorry to hear about the flooding! I love this author and have yet to get to this book. So glad you enjoyed it.

The book sounds good but the flooding does not. I hope those in need get assistance soon.

I have read two Kearsley books and loved them. This one is on my TBR list. So sad to hear about the floods! I will keep your countrymen in my prayers.

This book looks good - I wasn't aware of this title either.
We will be praying for your country and hope the flood victims receive the help they need.