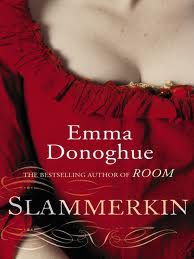 Set in the 1700's we start with Mary in prison. We then work backwards as to how she got there and that is how the story originates. So we start knowing almost all -  because we know also that getting into prison is easy and getting out of it in those times was almost impossible and that probably either our Mary will be hanging on a gibbet or sent out to the Americas. A bleak prospect either way.

Mary is very young, living with her mother, step father and baby brother when she is thrown out of the family home for getting pregnant.  With no money and no home, she ends up with a sympathetic prostitute Doll who takes her in, nurtures her back to health (Mary has suffered a complete breakdown by now) and also Doll introduces her to prostitution and the world of prostitutes in London.

For me the description of London from Doll's and Mary's point of view was an eye opener. The rampant poverty, the sheer struggle to survive against all odds, each man for himself only but despite this Doll looks out for Mary and the two become very close, definitely close friends almost family.
From the start we see how Mary's life is determined by poor choices and circumstance. Mary always wants something better and is determined to get it. She is not happy with the philosophy of her mother of being content with your lot and of knowing your place in society. She yearns for what she does not have and wants to get it by whatever means possible. She thinks it is unfair that someone has position and power just because the person was born into a position of such. This is what leads to Mary's gradual downfall.

It was a difficult thing to read because you knew that Mary's ambition was not going to get her anywhere. I would have been satisfied after the long trek to Monmouth to be taken in by the Jones's family and to be taught a trade and also earn your independence but Mary was not me. She wanted it all. This was a girl born into the wrong century - born two centuries later Mary could have got what she wanted through her determination and spirit and hard work. In the eighteenth century this was just not possible.

An interesting read definitely though very slightly depressing!
Posted by Mystica at 7:42 PM

This looks good. I really like Emma Donoghue's books.

Not to keen on the depressing bit

Your description of the London conditions at that time reminded me of my favourite author, Catherine Cookson.
Putting on 'the' list Mystica and thank you for sharing your thoughts!
Blessings to you and yours,

I've got this on my wishlist, because I really enjoyed The Sealed Letter.

I don't mind depressing books if they are well written.

this has been on my TBR pile for a while. Will get around to it eventually. I enjoyed your review