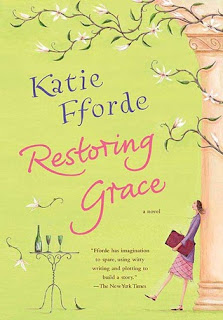 Restoring Grace is a light hearted read. - three very different women. We have Grace very young, recently divorced from a stuffy much older husband, we have single mother Ellie whose own parents shudder at being grand parents and we have Demi whose respective parents have both found new spouses and certainly do not want a teenager in their house.

All three women suffer from self esteem and feel sorry for themselves justifiably. It is not pleasant to be not wanted and Ellie and Demi's parents are particularly harsh. Demi's mother converts her room into a gym as she wants herself toned and fit for a much younger partner. Ellie's parents are too smart, and too modern for the art oriented daughter they have. In Grace's case there is a lot of animosity around as well. Grace inherited a rather old fashioned but valuable house and property from her godmother. The antiques in the house went to her two siblings - Allegra and Nicholas but they are far from being happy or satisfied. Allegra particularly resents bitterly (despite being married to a wealthy man) that Grace inherited this property and after Grace finds a valuable painting panel in the house is livid about the money that Grace will get.

Add to the mix two delicious men - Flynn rugged and handsome and Ran also the same and Grace despite her initial deep distrust of men finds herself drawn to Flynn as if to a magnet. In Ran's case Ellie wants a fling, before her pregnancy begins to show (I found this a bit unbelievable but then again I think I am too conservative for present day stories!!!!)  - she does not want a love affair she just wants some nice sex but the story turns out otherwise.

It was a nice, quiet read for an evening and I liked it.
Posted by Mystica at 7:31 PM

Wishing you a great reading week

I also read a few books by Katie Fforde. My notes say I read this, but I didn't find it as captivating as her other books. I can't remember! :-)

Sometimes I think I'm not the targeted age for some books. This is probably one of those books :)

I know what you mean about being old for some books. This sounds like a lot of fun!

I'll keep this one in mind. Great review!

I have not read this author. Sounds like a nice read.