WAIT FOR ME by DEBORAH DEVONSHIRE 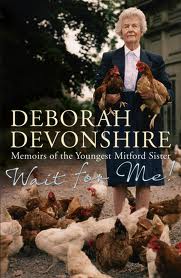 I have liked memoirs and I think the Mitford sisters ones are slightly different - a bit larger than life always, a bit eccentric and a bit in your face. They were a family which did not follow the norms of conventional society of the time,  though the broad outlines of normal family life were very much there - father was someone who hitched his children to carts or wagons to work off the children's excessive energy but at the same time both parents were far thinking on lots of things which was unusual for their era. They were very fair to the myriad people who worked for them and it is obvious that the caring was much more than skin deep. They did not have a callous attitude towards their "servants" and though aristocratic as they were, it could never be equals, they still had a far better time under the Mitford family than most other families of the time.

Although this book concentrates on Deborah's life as the youngest and the one most ignored by her siblings, it also brings to life what it was to be part of such a big, strange family. The life that Deborah led was to a great extent the most "normal" to the extent of marriage and family but she certainly had an exciting time of it and she seemed to have coped wonderfully - going through the changes of two World Wars, loss of family members at every turn, an alcoholic husband and the burden of great wealth which had to be looked after, nurtured so that it could be passed on intact either to the next generation or for the appreciation of the public in general.

How she turned Chatsworth into a self sufficient enterprise along with members of a Trust was for me amazing. She was willing to try out any entrepreneurial scheme that would benefit the employees, the House itself and the family so that profits aside it would be independent and able to manage on its own.

Very dry wit and facts as they stood - whether it was homosexuality, alcoholism, dissolute lifestyles, atrocious attitudes and tempers it is all in this book. Quite a chunkster I read it in stages and enjoyed it very much.
Posted by Mystica at 1:45 PM

I love memoirs and dry wit. This book sounds great!

It does sound like an unusual memoir. Glad you enjoyed it!

I love when people do book reviews. I love memoirs too and this one sounds like it is worth the read...Thank you!