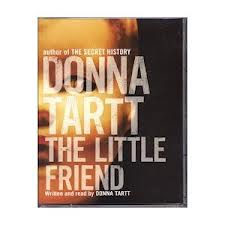 I was in the minority where I could not finish/did not like  The Secret History but I did think that I had not given it much attention. With this book the story is different. A bit like a Mark Twain novel we have our main character the child Harriet behaving in turns in a very child like and in turns an adult manner. I held my breath several times thinking that she was going in over her head and entering into spheres which she should have left well alone. Suspense yes!

The effect of a murder on an entire family and the lifelong effect it will have on 12 year old Harriet forms the main part of the story. The story set in the American South is very vivid in its portrayal of Southern ladies who live upto their imagery of being either delicate ladies or stalwart ones and Harriet sets out on a journey of trying to solve her brother's murder. Once she has decided who is the murderer she is very focussed on bringing justice to her family.

Set during one summer Harriet faces so much of misunderstandings, specially from her own family. Her mother completely unhinged by the murder of her son, has never really recovered and lives in a fog of her own. Her aunts try to cope, trying to maintain a facade of normality over their lives but put up a wall of resistance whenever the topic of the murder comes up. For Harriet herself I was just wishing she would put her dead brother aside and just get on with her 12 year old life. You felt for her, you felt the danger she was putting herself into when she dabbled in things much too dark and deep for a 12 year old.

It is the suspense in this novel which was tough to deal with. I was relived at the end of the book - relieved the book was over and I could delegate Harriet to a corner of my mind. Hely her best friend creates a nice balance for Harriet - a very normal, boisterous 12 year old boy who brings so much normality to the plot.

This book comes after a ten year hiatus so lets hope we do not have to wait that long for the third book.

I have yet to read The Secret History but it sounds like this one is the Tartt book to start with. Will have to keep my eye out for it.

This has me very intrigued. I haven't read the other book, but will start here too. Thanks!

This is one of the very, very few books I have started but could not finish. I just found it completely unengaging, but I'm glad you liked it more than I did.

I also really didn't like The Secret History when I read it (and almost didn't finish it either) last year but I still think I'll try this one at some point. I'll try and be prepared for the suspense!

My favorite book this week was Dr. Seuss: The Cat Behind the Hat by Caroline W. Smith. Please come see what I'm reading now.

I listened to The Secret History years ago and liked it. I've had this one on my shelf for a long time. Good to know I might like it better :)

I have to admit I preferred The Secret History to this one (it's still my no. 1 book), however, I love Donna Tartt's style and she somehow sucked me into the story. I've heard rumours that Tartt's third book is near completion so here's to keeping our fingers crossed!