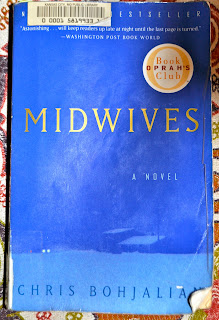 Sybil Danforth fell in love with the entire birth process and her patients became her extended family. There was no doubt of her sincerity and her caring for them throughout their pregnancy and their birth. Though she believed intensely in the necessity of a home birth, she also knew the practical difficulties faced with some pregnancies and never took a chance with something that she was just not comfortable with.

A disaster in the form of what should have been a normal delivery which went wrong, resulting in a hurriedly performed Caesarian section at home so that the baby was saved led to the crux of this story.

Bohjalian takes us along on a very smooth path of birth, Sybil's own family and how peaceful everything seems. But, you do know you are sitting on the edge because this cannot be a story if it is all going to be so nice and comfy. I was from the beginning of the story on edge despite such a serene setting because you did feel that turning over the next page was going to be the actual reason for this story.

The death of Charlotte sets a series of events leading to Sybil being charged and the resultant court case which divides the town as well as medical professionals is intense. I thought it was a bit unfair to categorize that all the doctors detested the habit of midwifery at home and that they were against Sybil from the very beginning but maybe I am wrong here. The focus on child birth at home is I suppose a personal choice and one which could be having pros and cons for all. This book brings it all into the open.

The story narrated from a 14 year old's point of view was also an interesting choice. How quickly and easily Sybil's daughter grew up with the turmoil of the case around her was a nice touch.

This was a book which was good to read.
Posted by Mystica at 6:08 AM

I read this one when it first came out and I remember really enjoying it. Many parts of the storyline remained with me. Great review!

On the list Mystica! Thanks as always for a very interesting review.

I liked this one when I read it about 10 years ago. The movie is good as well.