THE PHOTOGRAPH BY PENELOPE LIVELY 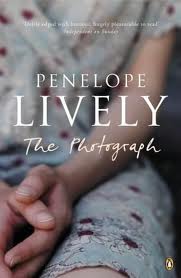 The plot is around four characters who are living set lives - not staid but just routine when the emergence of a photograph from a very long time ago sets the cat amongst the pigeons and the disruption of what was routine and peaceful to a somewhat agitated time.

Glyn discovers a photograph of his dead wife Kath in a rather compromising pose with Nick.  Glyn is the type who is not happy until he knows every little bit of what went on and it is the fact that he did not know rather than his wife's infidelity is what bugs him. Was this just one affair, were there many? and he does not stop there but tries to unravel through friends and friends of friends what his wife did month by month at times when he was involved (unfaithful? not interested?) elsewhere. Not just the discovery of the photograph but the fact that he makes it known to Elaine for whom this is the last straw with the feckless Nick whom she turfs out immediately.

Elaine is the strong silent type and her husband Nick who all along has been able to cajole his way in life now finds himself bewildered as to what has happened to him. He cannot believe or understand why Elaine should throw him out over a fling because for him it seems such a minor mistake! also it took place 15 years ago and he cannot understand why after all this time she should be inconveniencing him. For Elaine who is frustrated and and fed up this is the ideal chance to get rid of Nick and get her own life in order. It unsettles her though (this getting rid of Nick) if truth be told as can be seen by the end of the story.

That life is not what it seems and that characters sometimes also act out their part, that  life can throw some strange stuff at one and at the most unexpected times,  how the past influences the present and that we somehow can never get away from our past are all features of her stories.

I have one more book of hers and this is a collection of short stories that I am really looking forward to.

Hmmm, interesting. I;m a harsh taskmaster when it comes to stories of adultery but this sounds like it gets into the characters heads since it happened so far in the past.

I love short stories. Good luck with the third. Let us know what you think of her overall as an author.

I love the premise and am glad it was so well done!

hope you are well

This looks complicated - love that. Adding it to my wish list.