MYSTERY IN THE MINSTER by SUSANNA GREGORY 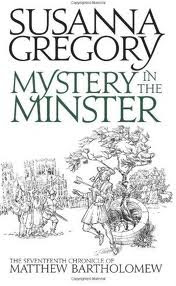 Set in 1358 this was for me a different take on Christianity as it existed in Britain - in York precisely. The surprise for me was the emphasis put on Purgatory - and all the means you had at your disposal (after your death!) to put things right and get yourself elevated to Heaven. That some of this was slightly ludicrous considering the lifestyle that some of these men led on earth is neither here nor there.

The story starts with Michaelhouse - a humble college with a paucity of funds. Having information that a legacy in the form of a church is due to them from the Archbishop of York the men from Michaelhouse set out to claim their legacy. Faced with severe opposition from another college who as executors of the will say that there is no codicil giving this chapel to Michaelhouse, begins a series of murder, attempted murder, mayhem, convent capers and what not leading to the eventual discovery of who is behind the gradual murders of all the executors to the will of the late Archbishop.

Bartholomew our sleuth in this book is a physician of repute in Cambridge and he is most interested in the workings of the hospital in York, their emphasis on cleanliness and washing of hands (still not accepted amongst physicians of the time) but this time around he is more involved in the intricacy and intrigue in which the hierarchy of the church in York is so involved in. Add to this the fact that one also discovers on the way the absolutely unhygienic, dirty way of living of the average person and we do realise how far we have come in a couple of centuries!

The book brought 14th century Britain to life - difficult I think for all and I just envisioned how much harder it must have been for the poorer folk if clergy had a tough time of it. I found the book slow in parts though it did hot up over the last 150 pages - only for those who like their history mixed up with a good deal of murder.
Posted by Mystica at 4:36 PM

Interesting. I don't really like medival historical fiction as it's hard to find it written from a Catholic point of view. But Purgatory has always has such misplaced understandings. The Church is pretty clear on the teaching now, if only people could only truly understand that it is already a guaranteed in place in Heaven.

I enjoy historical fiction especially when there's a mystery involved. The lack of hygiene in the middle ages always amazes me. I don't think I would have survived a day in the 1300s!