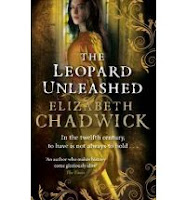 This was a win from An ecletic reader.

Renard heir to Ravenstow comes back from Antioch with an exotic dancing girl Olwen whom he is addicted to. Coming back to an ailing father and strife in the Welsh land of his birth he is also faced with his long time fiancee Elene - an absolute contrast to the striking Olwen and someone whom he has to marry as it is more or less a political alliance. Something Renard does not look forward to.

The story revolves around the constant war for supremacy amongst the highlands with each clan trying to gain the upper hand and control of the land. The conflicts are constant and bloody. Interspersed with this is the relationships which Renard tries to keep separate - the one with his wife and the other with his mistress.

After being taken prisoner during a skirmish and being rescued subsequently Renard realises with pleasant surprise that his mild, timid Elene is stronger than she appears and that Olwen his magnificient mistress is malevolent and all the time only looking out for her self whereas his wife is protective of his own interests at anytime.

This is light historical fiction. It also dealt with a period of history which I was not familiar with and which unlike the Tudors or the Regency period has not been done over to death. It was fresh and interesting.
Posted by Mystica at 6:23 PM

Nice review, I red the book long long ago

I have not read anything by this author, but this sounds good; thanks for the review.

I signed on to do a historical challenge this year and have to read 2 books. I'm looking for some new authors. She may be it!!

I love Elizabeth Chadwick! She has quickly become a favorite of mine. Have you read The Scarlet Lion?