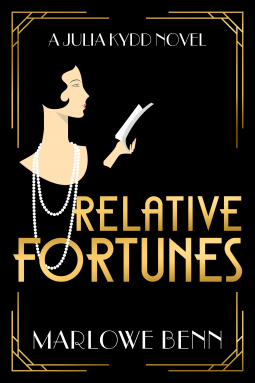 1920's New York was not a good place for women. Independence was scorned on, working for a living was considered not quite right, a woman's inheritance passed from her father to her guardian (brothers who were tyrants) and then to husbands who could squander the whole thing away and no one questioned the right.

When Julia is thrust into the Rankin's life through the sudden death of Naomi, she little knew that by befriending Glynnis whose character and personality are totally different to Julia, that she would raise the antagonism of the entire Rankin clan who close ranks against Glynnis and in turn Julia for raking over this sudden death. Within a couple of days, with no post mortem and a death certificate issued by an ancient family doctor, Naomi is cremated.

Unraveling the sordid story of Naomi's death was sad. A life lived in penury, all because her brother did not let go of the purse strings, his need to dominate and get his sisters to acquiesce to his strict standards of how society viewed them and the need to maintain the showmanship amongst high society in New York was uppermost in all their minds. If getting rid of someone who proved to be over and over again an embarrassment, so be it. Even murder could be excused because what was important was the family name.

This was not an easy story to read. You felt the hopelessness and the huge odds against which Julia was fighting for. Not just for Naomi but for herself personally in her war with her guardian brother who refused to acknowledge that she was part of her father's will. For women of today, this is not an easy read at all. This was a good story and however hard it was to accept women's role in society at the time it depicted it very well.

Even though it's frustrating to read the way women were treated, I do like that time period.

I've read enough of the era (and those preceding) to know it's a true reflection of that time. It was an interesting mystery and I'd read the next in the series.

This sounds like a poignant read, and like one I would want to read. Thank you for bringing it to my attention.