Murder in the Mill Race by E.C.R. Lorac 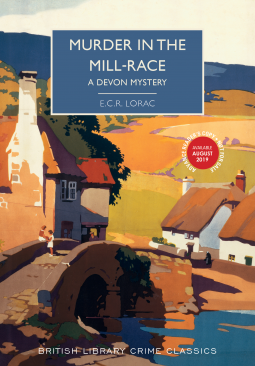 I got my computer working again and it makes writing reviews so much easier!
I'm slow on the Ipad with reviews.

The British Classic Crime series is a style apart from the myriad excellent mystery/murder/thrillers which abound. There is a sort of slowness and a quiet deduction, which has its own attraction.

Dr Raymond Ferens is taking over a practice by a doctor who lived in the village for decades. It will be a very long time, however good Ferens is , to be totally accepted by the village as one of their own. There are several fixtures of village life from the gossipy post mistress, to the lady of the manor who seems to rule everyone with her ways, and then there is the spinster caretaker of the local orphanage who is strict, gives no quarter, but not a single word will be spoken against her.

When she is found dead, drowned in a nearby stream the consensus is determinedly that she slipped and fell despite the local Constable having his suspicions of it being a murder. He is not merely shut up, but to the extent that he calls on higher powers that be because he realises very early on that the village has decided to gang up against him and not give him any clues as to what really went on.

The story takes on from there and slowly the plot unravels. Very little will surprise me when dealing with villagers in England or otherwise. Human beings are all complicated and this story illustrates this in full measure.

Sent to me by Netgalley, for an unbiased review, courtesy of Poison Pen Press.

You've intrigued me with your review!
Also glad to hear your computer is up and running again.

I've been reading some Lorac and really like the books. Will look into this one!

Sounds like a good one. I do enjoy mysteries.