The Winemakers by Jan Moran 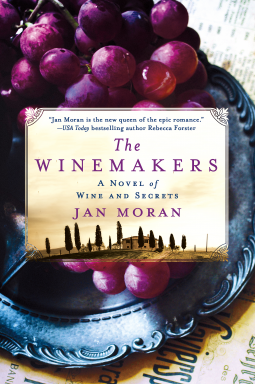 The year is 1956 and Caterina is facing a cross roads in her life. Her mother Ava is a self made woman who has single handedly managed a vineyard Ava's life was a struggle from the time she got married. Luca was a villain and after a very rocky start they arrived in California and she ditched him hoping that it was the last she would see of him. By 1956 she was an established business woman respected by all the men who ran vineyards in this part of the world. Her world and Caterina's too was about to collapse.

An unexpected legacy of a house in Italy came at a very propitious time for Caterina. She was now a mother of a baby girl - an illegitimate pregnancy and this was not something that 1956 America was willing to accept. Forced against her will to consider adoption, Caterina fought against it and knowing what her mother's attitude would be (and it was) Caterina decided to go to Italy to make a life for herself there along with her baby daughter.

Unraveling secrets of both Ava and Luca's past was a revelation to Caterina coupled with the added complication of Marisa's father's parentage. The story was a complicated and ugly one and not one that had died down despite the fact that decades had gone by.

Told in two time frames - the mother and daughter - both reaching the end of the story eventually was very well told. The background to the wine industry in Italy and California were dealt with as well as the stories of the families from each era. Richly embellished the story was a family saga despite tragedy, and death highlighted with happiness, love and joy. The survival of the human spirit despite and against all odds is once again a highlight of the story.

Sent to me by Netgalley for an unbiased review courtesy of St Martin's Press.
Posted by Mystica at 6:42 AM

I love the review you have given this book Mystica and will try to find it. Anything revolving around vineyards and wine always interest me, and of course anything Italian!

Love your review and this is a very enticing read. I love stories like this. Want it!!