A Kind of Grief by A D Scott 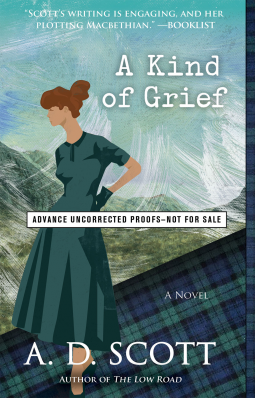 The setting was very good and the characters were priceless. Joanne and MacAllister were quite normal people - but it was Calum, Mrs Mackenzie and the others who formed part of the newspaper that were priceless. From the language, diction, attitude and style these were all unique. I loved the tidbit that a reference " to 45" did not mean any time in the recent past but to 1745!!! Long memories the Scots!!!

A seemingly apparent suicide finally unravels to what it is not. All indications point to murder and the way it is hushed up by the police, the appearance of big wigs on what is a small time northern newspaper and the intimidation that follows does not warrant this death.  Alice was a controversial figure it is true but who would want to murder her. The clues lie in her house, in the paintings and etchings that she surrounded herself with and also her isolation and description of being a witch were what caused her death.

Joanne is determined to get to the bottom of this mystery and though her husband supports her, he knows she is heading into very dangerous territory. How to protect her and how to also obtain the story which lies beyond this death forms this story.

Part of a series (my first foray into reading this author) this was a read that was an absolute thriller.

Sent to me by Netgalley courtesy of Atria Books, for an unbiased review.
Posted by Mystica at 2:30 AM

This is a really good series, and one worth reading from the beginning to observe Joanne's development.

Wow, I can tell how much you enjoyed this one! I'll have to make a note of it.