The Silent Treatment by Melanie Surani 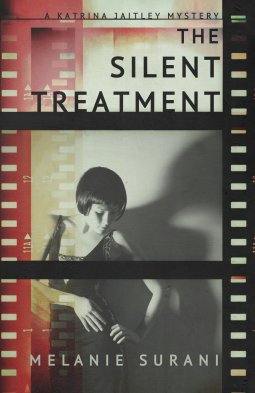 The story centers around Katrina who has just escaped an abusive relationship. Trying to find her feet, evade her ex and evade her extended family she just wants to lie low and recover from the blows to both her mind and body. She wants to start afresh but knows that getting rid of Jeremy from her mind is easier said than done, despite the abuse, she feels that an attraction still exists.

Dragged to a garage sale by her friend Bridget she discovers a box of jewellery which she buys. Hidden within it is an old film reel which is the beginning of the actual story. A murder captured on film, hidden by the studio, covered up for a very long time and one which will be of interest and worth a lot to several people.

Peter, the grandson and person who ran the garage sale is obviously one of those interested along with several others and trying to keep it in safe hands is Kat's job.

The storyline was good, the dialog and characters true to themselves and the author did the mix of mystery with a touch of romance deftly.

The book was sent to me by Netgalley courtesy of Booktrope.
Posted by Mystica at 4:50 AM

I like the sound of this. I'm always buying things at yard sales, hope I never find anything like Katrina did!

It is an intriguing story and I really enjoyed your review.

Oo this sounds pretty good! And I love the cover!

I really like the cover of this one and the story intrigues me. I am glad to hear you liked it, Mystica!